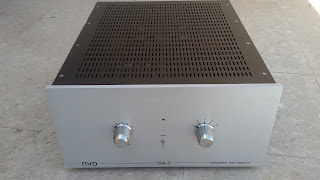 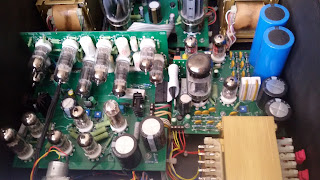 While I was still in high school, a friend of mine came into possession of a Leak Stereo 50 tube power amp, with a matching ‘Point One’ pre-amp, from the late 50’s. Everyone looked upon it with amazement, what with all those big parts on top, especially the glowing tubes! Unfortunately, it stopped working some days later. That’s when I took it upon me to fix it. It was a daunting task, since at the time I had no idea what a resistor or a capacitor was, but soon enough it came back to life with new zest. But I didn’t stop at replacing all the parts. I also replaced all the wiring with expensive teflon-insulated wires from my local Hi-fi shop (yes, Panikkos), and after listening to the result, I was so amazed with the sound, that I simply refused to give it back! Instead I traded it with my solid-state B&O amp. My friend was not impressed: he suggested I simply make a duplicate of the Leak amp-and so I did! A couple of years later the seemingly impossible task was completed, and he had a clone Leak amp, chassis, transformers and all. As fate would have it, I happened to be working at a small transformer factory, so I managed to duplicate the transformers as well.
After that, I was swept along by a frenzy of tube amp building. This included two 240W mono blocks, with 16 EL34s per channel!
All the time I had all the necessary supply of excellent equipment from Panikkos, who, as I mentioned earlier, had a Hi-fi shop with all sorts of audiophile gooddies. Speakers, amplifiers, turntables, cables and of course a small regiment of cartridges, all carefully handpicked after endless hours of listening-and arguing! Panikkos was always shure about his choices of equipment, and I always tried to be a good listener, both to his ideas and to the equipment they supported-I always ended up with a great piece of equipment.
At one point, there was a lot of talk about a phono pre-amp, something sorely missing from our collection. I decided to buy the Croft phono pre-amp, a basic three-tube circuit plus a one-tube plate regulator-a very good buy for £200. Thus I started on the long quest for the perfect tube phono pre-amp.
The biggest problem here is noise: the MC input stage is simply too noisy for most low and medium output moving coil cartridges. I quickly moved away from the 12AX7 at the input stage. The 6922/ECC88 is very good, but I felt I needed something even quiter. After searching for the right tube, I came across the Russian model 6C45P. It’s a heavy duty pre-amp tube with the lowest equivalent noise resistance of any tube I could find. One single triode per tube, it has a thick plate to withstand an excess of 40mA plate current, cranking up the consumption to that of a small power pentode! In this design I use two per channel, making this the lowest noise tube phono pre-amp I can imagine.
The next issue was the RIAA equalization. This requires ample amplification-more than 40dB plus headroom-to implement properly, one tube stage is not enough. So I use two 12AX7 stages, with a 12AU7 cathode follower output, while taking advantage of the merits of both passive and active equalization.
The power supply is a cost-no-object design:dual mono, separate chassis, two tube plate regulators per channel, ample filtering, star grounding. All heaters are regulated DC.
Quality parts throughout, selected for each particular task in the system, while precision resistors and capacitors are used in RIAA network/filtering.
Of course, all this developed gradually from the bottom up, I never intended to make it this big or elaborate, my intention was to build a phono pre-amp lacking nothing, a statement of tube excellence, with the best possible engineering. I am satisfied with the results! A smaller, one-chassis version is on its way (‘only’ 13 tubes!).
As for the idea of making this a commercial enterprise: it came naturally. Everyone who knows me expected me to do this-after all, it’s what I do!
Over the years I spent a lot of time and money building power amplifiers (that’s another story), but at some point I decided it was time for the phono pre-amp. Panikkos ‘discovered’ it, and after that there was no stopping him: he went head on into promoting it, and the rest is history!
3 comments:

Email ThisBlogThis!Share to TwitterShare to FacebookShare to Pinterest
Labels: The NVO story 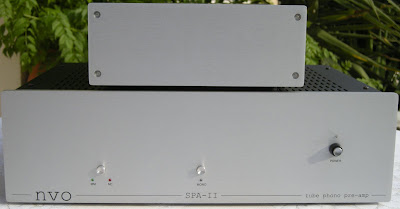 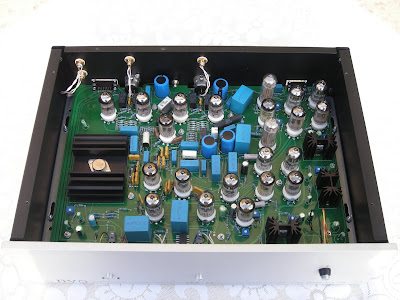 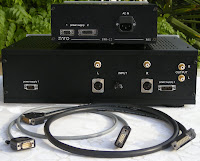